It’s 4 p.m. What’s for dinner? This is the question that resonates with consumers across the nation. It’s no wonder! Eighty percent of Americans ate dinner daily in 2020, versus 67% for lunch and 63% for breakfast, according to Eating Occasions 2020, released in January 2021 by the Bellevue, WA-headquartered food and beverage consultancy, The Hartman Group. Overall, three-quarters of eating and drinking occasions took place at home, with 88% of these as dinners in 2020 and only slightly less at 82% in 2019. However, this same report reveals that while consumers cooked more at home when the pandemic started, this didn’t last long, as cooking fatigue set in, and consumers started ordering out from restaurants. Enter a huge opportunity for the supermarket deli to offer dinners to go.

“These days, it is incredibly important to offer a meals to-go program. It’s what our customers are looking for right now,” says Travis Blanton, director of fresh for Adams Hometown Markets, a 15-store chain based in Cheshire, CT. People are increasingly moving towards fresh. Our customers want convenience, too. They want to be able to quickly go into their local store and grab something quick and easy. A dinner that will light up their taste buds with the added comfort of freshness and an unspoken trust that only a neighborhood market can provide.”

“Consumers have not only relied on supermarkets a lot more during the pandemic, but they plan to continue shopping at them at increased levels into the future. In fact, 83% of consumers say they plan to shop at supermarkets as much or even more in the future. That means that consumers will rely on supermarkets to meet more of their dining needs, which includes a wider range of options for take-out dinners,” says Mike Kostyo, trendologist for Datassential.

Chicken, both fried and rotisserie, continues to be top-of-mind for consumers and a strong seller for operators, with nearly two-thirds of operators saying their fried and rotisserie chicken sales increased in the past year, according to Kostyo. “Beyond this, offering premium ingredients in restaurant-quality presentations, dinners for the whole family, more globally-focused foods, and plant-based foods will resonate with consumers. With 76% of supermarket operators offering a deli prepared foods program, offering unique, on-trend options can set an operator apart from the competition.”

Lowes checks the boxes on all four of these points with its Chicken Kitchen program, which started six years ago. The concept features a destination display, its own branding and employees in Chicken Kitchen-theme uniforms. The menu focuses on chicken, sides and bread, with customization at every level. For example, customers can choose rotisserie, fried or chicken tenders. Then, they can select two sides from a choice of eight. Among these are mashed sweet potatoes, broccoli seasoned with an Asian sesame dressing and green beans flavored with lemon and dill. Finally, shoppers can opt for six yeast rolls or four pieces of cornbread. These selections are bundled in one Chicken Kitchen-themed bag and sold for one price at the checkout.

“Rotisserie chicken is our number-one meal, although the tenders are a kid’s favorite. We hand batter the tenders. On the sides, the macaroni and cheese are the bestseller. Our chef has a unique recipe using cavatelli instead of elbow macaroni, as the cavatelli is a more substantial pasta and holds much more sauce. The second most popular side is mashed potatoes. These are fresh, never frozen, and made with real cream,” says A-Fattah.

Two highly successful annual Chicken Kitchen dinner promotions at Lowes Foods are the 12 days of Chickmas in the run-up to Christmas and the two-week Feed Your Peeps before Easter. Both menus offer a choice of rotisserie chicken or eight pieces of fried chicken, plus two large sides and rolls or cornbread for nearly $3 off the regular meal price. The Easter promotion also includes a complimentary 2-liter soda.

“The holidays are a busy time where shoppers are focused on ingredients for the big meal upcoming, but often don’t think about what they are going to eat that night. We make it easy for them with our Chicken Kitchen holiday promotions,” says A-Fattah.

Core poultry items such as rotisserie chicken and fried chicken, as well as items like tenders, wings and boneless wings, are all well-positioned for success in carryout dinners, says Eric Le Blanc, director of marketing for deli, at Tyson Foods, Inc., in Springdale, AR. For example, “rotisserie can be used as a roasted chicken option or used as an ingredient in salads, casseroles, tacos, etc. The more ideas for simple-to-create meals using core center-of-the-plate proteins that are offered, the more often the option gets selected—because they are different meals that happen to use the same center-of-plate protein.”

Shoppers are looking for flavor, says Adams Hometown Markets’ Blanton, “Something out of the ordinary realm of a heat-up meal.”

Blanton sat down with the chain’s in-store chefs in the spring of 2017 and came up with seven core meals. These include Baked Cod, Chicken Marsala, Shrimp Scampi, Eggplant Parmesan and Sausage & Peppers. Each is sold family-sized, in ready-to-heat and eat packaging, in an upright refrigerated wall case by the deli. Since then, the signature flavors have remained, plus several rotating recipes have been added to the retailer’s assortment to meet seasonal customer demand.

“Our new Gourmet Side dishes introduced in 2020, such as smokey Butter Beans, Adobo Rice & Beans and Green Curry Lentils & Quinoa, are popular because they are not often found in the retail deli,” says Carl Cappelli, senior vice president of sales and business development for Don’s Prepared Foods in Schwenksville, PA. “Retailers can pack or scoop out with their meal solution offering.”

Packaging can be as important as the menu when it comes to top-notch deli dinners to go.

“We see a lot more cross merchandising, anything from candy and nuts, snacks and dips, and full meals, in the same container,” says Kali Kinziger, associate product manager, for Placon, headquartered in Madison, WI. “Our HomeFresh Entrée line is ideal for merchandising meals like meatloaf and mashed potatoes, wings and veggies, and salmon and rice. It’s made of polypropylene, and it’s microwavable as well as leak-resistant.”

The HomeFresh Entrée line includes one-, two- and three-compartment black bottom containers with clear lids in sizes from 8 to 40 ounces for single-serve up to family-size meals. The containers are conducive for modular stacking for an eye-catching display.

“Our customers are looking for a healthy, quick option to enjoy with a minimum fuss,” says Christine Whelan, owner and managing director of Sahadi’s, a century-old, two-store retailer based in Brooklyn, NY, which earned an America’s Classics award from the James Beard Foundation in 2017. “I find most of our customers also love to cook so when they just don’t have the time, they want a menu that reflects how they love to eat; diverse, fresh and bright flavors; plenty of choices of side dishes as well as vegetarian and vegan options.”

Combo bowls, such as hummus, jumbo white beans and greens with a choice of chicken or salmon, are sold either for lunch or dinner and can be customized with a protein and two sides on a bowl of greens. Customers can either pick up their meals in-store or have them delivered by DoorDash.

“We have essentially had the same take-out dinner program we began with, although we seasonally change both our in-store deli and our set dinner options. As we look at the numbers of what sells, we decide which items to bring back as the seasons change and as customer tastes change,” Whelan adds.

HOW TO SELL MORE

The best way to market deli dinners to go is to show meal solutions behind the glass or in a grab-and-go set with signage, says Don’s Prepared Foods’ Cappelli. “Consumers often buy with their eyes. This way, they can see the center of plate and side items together for a delicious meal.”

Retailers must be in-stock between the hours of 4 to 7 p.m., recommends Tyson Foods’ Le Blanc. “We have repeatedly done in-store audits across the country of anywhere between 500 to 1,400 stores, and the result is very consistent: 9% to 11% out of stock in the key dinner hours. Not only is that a lost sale for today, but the shopper tends to deselect the retailer for up to four weeks after. This challenge to be in-stock is observed fairly consistently, even among retailers with a reputation for great execution. Our latest evaluation (October 2021) showed that the strongest in-stock position is in the morning when demand is lowest and that through the day the stock levels go down as demand rises.”

Three-quarters of supermarket operators say they use end cap displays to promote prepared food offerings, while 72% offer holiday meal packages and offerings and 80% promote their options via their website, with 72% using Facebook and 66% print advertising, according to Datassential’s 2021 Supermarket Prepared Keynote Report.

Coupons, both register coupons and loyalty card-based coupons, are the top ways to sell more deli dinners, according to Datassential’s research.Price discounts aren’t everything, says Tyson Foods’ Le Blanc. “Since 2010, we have tracked the drivers of satisfaction for prepared foods in the deli. Price has consistently ranked anywhere between eighth and tenth on the list. Here’s a shocking insight: when people buy food, they want it to taste good and they want the people who they consume it with to be satisfied. If you’re talking about anything other than that, you’re missing the boat.” DB 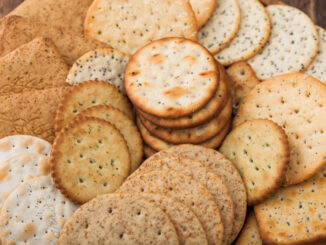