One thing’s certain: meats like roast beef aren’t getting out of dodge, notes Roxanne Johnson, president of RJ & Associates in Houston.

“Consumers aren’t giving up beef, poultry or pork. Meat is here to stay,” says Johnson. That said, what is changing is the approach shoppers are taking when eating, shopping and cooking, she continues. Their new considerations are convenience, ingredient and recipe inspiration, food production practices, better for me, the planet, and the animal. “We’re opening our minds and mouths to these new foods and ingredients. Manufacturers are faced with recreating their core products. Retailers are challenged to become educated for the purpose of selling it,” she says.

The United States consumed the fourth most beef per capita in the world in 2016, Beef2live.com reports.

Meat consumption here is likely to undergo a noticeable shift over the next decade, as production of beef and pork grows and prices decline, reports the Washington, D.C.-based USDA Economic Research Service. USDA baseline projections, which provide a long run view of the U.S. farm sector, show that production of beef and pork will expand steadily between 2016 and 2025, driven by lower feed costs and strong meat demand domestically and abroad. Both beef and pork production are projected to grow by 11.7 percent and 10.3 percent respectively during this period.

Healthy products count, too, and roast beef, of course, is cut from lean cuts of beef and is low in fat, rich in protein and loaded with beneficial minerals, reports SFGateHEalthyEating.

There’s also a growing craving among shoppers for snack food, which seems to be smack dab in the wheelhouse of roast beef. Besides its nutritional value, including new high end beef classifications like Kobe and Waygu, roast beef is also portable and flavorful, explains David Brandow, director, international sales, at Piller’s Fine Foods in Waterloo, Ontario.

But shoppers also are thinking sandwiches, pre-manufactured roast beef sandwiches, to be exact, even though a pre-manufactured product would, of course, have less potential for customization, both in terms of the amount of beef, type of bread and other add-ons, says Lars Perner, Ph.D., assistant professor of clinical marketing, department of marketing, Marshall School of Business, University of Southern California in Los Angeles. “Roast beef sandwiches are a product with a long history, and there’s a history of custom orders.” One caveat: with increasing concerns about dietary fat, he suspects that some of the business has been lost to chicken-based items and items based on other lower fat meats.

That said, while sliced roast beef from the deli counter might make an ideal sandwich, it can also be used to create a number of different dishes.

Getting the Word Out

Then there’s the matter of fueling consumers’ desires for meats like roast beef to begin with. Along those lines, Johnson cites evolving developments in marketing and merchandising, both of which she calls “a big deal that warrants serious attention.” The fact that deli beef and ham, the traditional favorites, will need to be ‘reborn’ should be embraced. “Resistance,” she adds, “will only waste time. [It’s important to] move forward with great knowledge, creative minds, re-education and strengthen everything in-store and in the deli, especially experiential events that stimulate all five senses at one time.”

She emphasizes the importance of diving deep into signage, digital, social media and mobile promotions with education.

Evan Inada, customer marketing manager at Columbus Craft Meats, part of Hormel Foods in Austin, MN, comments that merchandising items, such as condiments, cheeses and spreads, that enhance the beef, “is a great way to cross merchandise in or around the deli case. Making a ‘go to set’ of fresh ingredients to enhance the shopability of making a sandwich at home is a fun way to make a build-a-kit experience with your deli meats supported by recipes for craft sandwiches.”

Brandow says roast beef marketing is a matter of having an understanding of free range and grass fed cows; the authentic story behind the higher end Kobe  and Wagyu beef, and product usage in authentic recipes.

Stores also can promote roast beef by driving home its key selling points, like the fact it’s a good source of protein, vitamins and minerals, such as vitamin B6, vitamin 12 and zinc, says the IDDBA, which also points to new roast beef flavor offerings and texture options.

Not surprisingly, regardless of the industry, it’s important to only merchandise items together that make sense, states Boston-based Repsly, which helps retail execution teams to achieve peak performance in the field and maximize their impact on sales. By leveraging mobile CRM software, field merchandisers can take photos of different displays to keep track of which items are being paired together in each store, and then the marketing team can analyze the sales data of those groupings to determine which ones sell most effectively together.

To succeed, cross merchandising relies on research and analysis, followed by the implementation of new ideas based on that research. The first step is arming yourself with knowledge about which brands your customers like most, says Repsly. Managers should have their field merchandisers regularly visit each store and collect customer data, such as the type of products being purchased, the quantity of the product, in addition to any special notes, such as whether an item is on sale. That way, companies can determine which of their cross merchandising strategies are working.

In the meantime, Johnson says both prepackaged and full service offerings are necessary. “Recognizing the introduction and expansion of self service fresh sliced and packaged roast beef has been interesting.  It was curious from the start and not always executed in the finest manner,” she says. But it has gained traction, thanks to support from customers who appreciate fresh sliced deli items but who are uninterested in extended waits.

“The concept has advanced from simplistic, small displays in a shared merchandiser to dedicated expanded displays, branded cases and new business.” On top of that, “it’s so operationally viable, production and labor positive and shouts ‘fresh’ and ‘easy’. It’s a great concept to building sales in the standard deli selection. I wish I’d thought of it,” she exclaims. DB 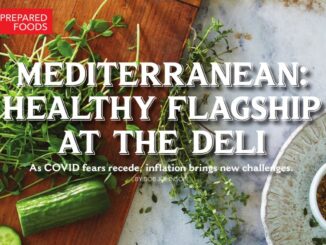