Delicate, yet bursting with rich flavor, prosciutto is one of those foods that is becoming more well-known due to widespread appeal. Wrapped around melon, spread atop pizza or consumed on its own, the dry-cured ham delivers a salty sophistication and depth of flavor that offers wide-ranging pairing and cross merchandising options.

The word “prosciutto” is Italian for ham, but is usually used to describe the seasoned, cured, air-dried ham that comes in thin slices. The original prosciutto hails from Italy, but quality versions are now made elsewhere; quality American prosciutto is not too difficult to find. “Prosciutto cotto” refers to the cooked product, and “prosciutto crudo” is technically raw, but it’s been cured for a year and sometimes longer, so it’s safe to eat and doesn’t quite look or taste raw.

“With over 2000 years of history behind it, prosciutto is like a bottle of Champagne,” says Alberto Minardi, CEO of Principe Foods, based in Long Beach, CA. “Each piece is unique. It is a live product and a natural product, made with only salt and pork. Prosciutto is one of the best protein sources that anyone, an elder person or child or athlete, can have.”

“Prosciutto’s popularity in the U.S. has shown a steady climb. In fact, it is Prosciutto di Parma’s number one export market,” according to Jason Stemm, vice president of Minneapolis-based Padilla, which is the marketing agency for the Consorzio del Prosciutto di Parma, an organization of producers in Italy for this geographically protected (PDO) product. “In research conducted in 2018, the Consorzio found that prosciutto was the fourth most consumed specialty meat after pepperoni, bologna and salami, with more than three out of five adult Americans having purchased or eaten prosciutto in the previous 12 months.”

Yet there is still significant room for growth. Just 37 percent of Americans purchased prosciutto in the past year, and of those, less than half purchased it regularly (more than four times in a year), according to the Consorzio.

Alchemy of Pork and Salt

Prosciutto dates back to pre-Roman times, and it’s been a staple of Italian cuisine since then. The first mention of the meat was in 100 BCE from Cato the “Censor,” who wrote about the extraordinary taste of the cured ham made near the town of Parma, Italy.

Prosciutto starts out as the hind pig leg, just like speck or Spanish jamón. It is then trimmed, salted, hung and allowed to dry for several months or even years. The technique of salt-curing and air-drying pork was born of necessity rather than luxury; it was a way to preserve meat from going bad, so that an animal slaughtered in autumn could last throughout a long winter. Over the years, the once rustic techniques have been perfected and modernized, although the process hasn’t fundamentally changed. Since prosciutto is just pork and salt, the many nuances in flavor, texture and marbling stem from the hog’s breeding and raising, climate, technique and the duration of aging.

Here’s how the magic happens: the meat is covered in salt and allowed to rest for a few weeks or even months. The salt draws out moisture, which prevents bacteria from growing harmful bacteria and concentrates its flavor. After salting, the pork legs are washed and seasoned, often with a secret family recipe involving black pepper, juniper, garlic or rosemary for a unique and fragrant flavor. They’re then left to dry-age in a carefully temperature- and humidity-controlled environment for a year or more. The longer prosciutto is aged, the more complex it will taste. Pork, salt, air and time combine to create something more delicious than the sum of their parts.

The Many Faces of Prosciutto

Prosciutto di Parma DOP is a variety of cured pork made in Parma, a town in the heart of Emilia-Romagna, according to age-old tradition and specific regulations. It’s considered the crown jewel of prosciutto, and its production is closely monitored by the Consorzio di Prosciutto di Parma. No additives of any kind can be used—just local pork, sea salt, air and time—at least 20 months of aging are required, during which time it develops its melt-in-your-mouth texture.

Before heading out for sale, an inspector pierces the ham with a thin needle to test for flaws. If the prosciutto passes the test, it is branded with the Prosciutto di Parma seal—a five-point crown with the word “Parma” written inside—to let buyers know the product is the real deal. “This fully traceable system is guaranteed by the Parma Crown that is branded on every certified leg and pre-sliced package of Prosciutto di Parma,” says Stemm.

Like Prosciutto di Parma, Prosciutto di San Daniele DOP is crafted from high-quality pork legs and sea salt. It’s made from start to finish in San Daniele, a small village in Italy’s northern region of Friuli Venezia Giulia, and the pork ages in air fresh from the mountains and the Adriatic Sea. After salting, the meat is pressed for two to three days, a unique step in producing Prosciutto di San Daniele. The pressing allows the salt to more deeply penetrate the meat and forms the prosciutto into its signature guitar shape.

“Principe Prosciutto di Parma and San Daniele are some of the top-quality prosciutto produced in Italy,” says Minardi, which he attributes to “the care, the knowledge of our people, and the absolute maniacal way of looking at each individual detail involved from the beginning to the end of the process.”

Increasingly, American producers are crafting and selling prosciutto. Columbus Salame, founded in San Francisco in 1917, uses Italian recipes to make cured meats in Hayward, CA. Their hand-trimmed prosciutto is leaner than most and slow aged for at least 90 days.

Niman Ranch hams are rubbed with just sea salt and lard and cured without added nitrites or nitrates in New Providence, RI.

La Quercia in Norwalk, IA, prides itself on its sustainable and humane practices and makes silky and sweet prosciutto from heritage breed Berkshire pork.

Interestingly, the prosciutto consumer cuts across all age and income levels. Stemm explains, “They sometimes refer to prosciutto as ‘fancy ham’ and consider it for special occasions and celebrations.” But while many consumers still consider prosciutto and other specialty meats a special occasion purchase, there is no reason prosciutto cannot be enjoyed on any day.

“Whether you are a small coop, an independent regional store or a large supermarket chain, the key is education,” says Minardi.

“Beyond handling, being able to talk about the product, its history and provenance are all key in growing sales,” Stemm agrees.

Shoppers’ top three sources for determining which specialty meats to buy are in-store display, in-store experiences and word of mouth. “Successful retailers often offer different ages of Prosciutto di Parma and are active in sampling to customers,” says Stemm. “It should be prominent in the display case. Including some description of where it is from and how long it is aged can help romance the prosciutto. If you are slicing for an order, consider offering a few tastes to others waiting at the counter.” Promoting it in signage, store ads and through digital and social channels can bring awareness to foods that are less frequent purchases.

Staff training is very important (the Consorzio has tools for retailers at Parmacrown.com). It is crucial that slicers know how to properly carve the meat; it’s one of the few meats in the deli case that has skin on it, and a nice border of fat around the outside is important to the eating experience.

Prosciutto is a versatile meat for pairing with other foods, such as sweet, ripe melon or layered on a baguette with Mozzarella. Top crostini with prosciutto, cherry tomatoes, a sliver of Parmigiano Reggiano, and a drizzle of balsamic vinegar. Prosciutto makes a flavor-packed and elegant topping for flatbreads and pizza, and is great in a salad with arugula and peas, or watercress and figs. It adds a different dimension to a grilled cheese sandwich with tomato.Prosciutto’s well-rounded combination of salt, sweet and fat make it a good food for pairing with wine and beverages. DB 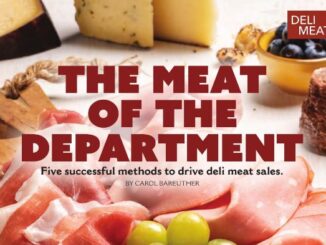 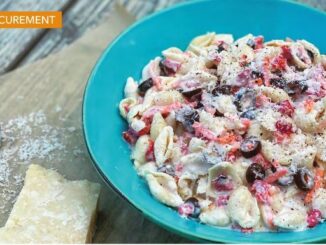